Can Using Google AdWords or AdSense Affect Your SEO?

Can Using Google AdWords or AdSense Affect Your SEO?

This is one tricky question to answer. Google naturally wants to promote the use of their ad programs, because it gets them a larger market share and it gives them more money to play with. On the other hand, they have a strict “don’t be evil” policy, and they’ve done a lot of work to try to divest money from SEO. They don’t want big companies to always win simply because they have more money to invest.

At the same time, those big companies tend to win because they can spend more money doing the things that make organic SEO work, like publishing large amounts of highly researched, quality content produced by a team staff or network of freelancers. They can spend more money building connections and getting links. They can hire important and visible influencers. There’s only so much Google can do to limit the influence of money in a way that can’t, well, be circumvented with enough money in the right places.

So the question is, how might using AdWords or AdSense affect your SEO? Can it boost your organic search results? Can it hurt them? Let’s investigate.

Straight From the Horse’s Mouth

First, give this video a watch. Did you catch it?

“Google does not, not, repeat NOT give a higher ranking to websites which run AdSense. They’re completely independent. It’s not the case that if you run AdSense you get any kind of boost in a ranking or anything like that.” — Matt Cutts 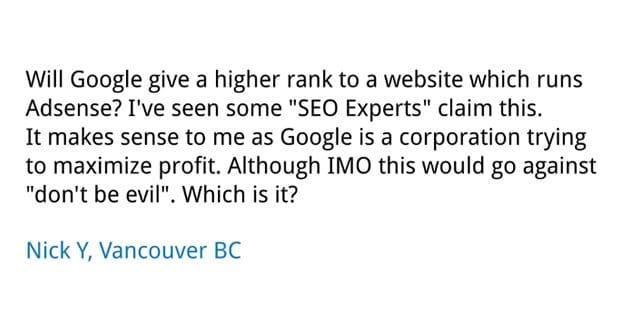 Yes, the video is five years old at this point, but it’s one of the most unqualified, unchallenged answers in the entire knowledge database. It’s the difference between short-term monetary gain for Google that hurts them in the long run, or long-term value that they can feel good about providing, which gives them more investors and longer subscriptions to their other services as a reward.

Additionally, numerous companies across numerous industries over the last decade have run tests with web pages before and after AdSense and AdWords campaigns, showing that there’s no direct benefit that comes from running either program. You don’t get more organic value for being a better publisher in Google’s ad network, and you don’t get more organic value for spending more money in their ad programs.

How AdSense Can Hurt

The fact is, AdSense can actually hurt your site, though you typically have to implement them incorrectly for that to happen. How’s that work?

First, AdSense runs in a script which calls data from Google servers. No matter how fast this script is and how fast the servers respond, it’s the transfer of data in a call and answer, which means additional delay. This can slow down page load times and, if the delay is significant enough, can hurt your organic search rankings.

Secondly, ads are ads. Google has a long-standing penalty on sites that implement too many ads above the fold of a website, or too many ads on a given page in general. They don’t whitelist their own ads, or else you would see every website running as many as they could cram in and still get clicks to.

Then, there’s the problem with MFAs.

Made For AdSense Websites

An MFA is a website Made For AdSense. Imagine that you want to make some money for a low amount of effort. You decide AdSense is the way to do it, so you create a site based around a narrow niche topic that you identified to have a moderate level of interest and a minimal level of competition. It’s not a top-tier niche, but the competition is so slim you should be able to rank quickly and easily. 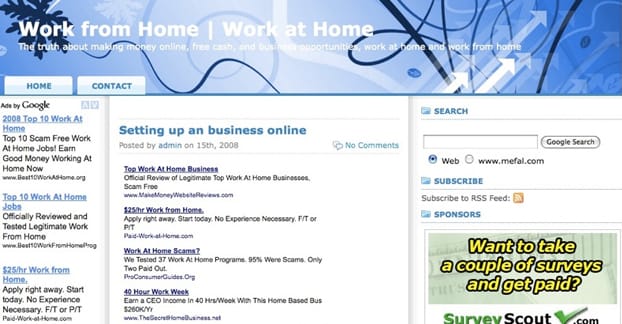 You create a basic blog website with about half a dozen pages. These pages answer simple niche questions, provide beginner’s guides, and so forth. They’re not the best content out there, but they exist as a median to get somewhere on the first page of search results. You then enable AdSense on all of those pages.

This alone wouldn’t be too bad. The problem is, webmasters are always looking for shortcuts and ways to the top without spending the effort of climbing. One such shortcut for MFA sites was to steal content rather than produce it yourself or commission it. If it costs money or time, people will try to find ways to pay less of both.

This led to tens or hundreds of thousands of such pages littering the web. They had very little value for the user, often with content that was outright stolen, though many would spin it first so it looked a little more unique, though it often still looked bad in some way. At best, some sites would spend a few dollars buying the content from the cheapest Indian vendors on Fiverr or Textbroker they could find.

Take a look at this site for an example. Note that this is a live MFA site, so feel free to use a noscript or adblock program. I’m not supporting them. They have something like 15 total blog posts, and about 7 AdSense ad units per page. The content is basic, the formatting and proofreading are nonexistent, and the layout is ultra-basic. It exists solely to draw in people with some financial keywords, and hope those people aren’t running ad blockers.

Some MFAs are worse. Google debuted the Top Heavy Update in 2012 to help demote those sites, specifically so that users would be more likely to find sites with real value and maintenance ongoing.

There’s one more way you can hurt yourself using Google’s ads, and that’s by using both AdWords and AdSense in conjunction.

AdWords is the PPC ad system Google runs. You pay for ads and Google serves them up to people who run searches for the keywords you choose. People click on those ads and go to your site, which charges you, and you hope you can make money from those people. Why not put AdSense, the ads on your site that pay you when users see them, on your landing page?

First of all, Google doesn’t like it when people try to abuse their systems. To them, this looks like you’re paying for traffic to boost your earnings with AdSense. Even though the other half of the equation is theirs, they have no qualms about penalizing you for doing it. In this case, however, they’re not as likely to penalize your search ranking. Instead, they’re more likely to lower your quality score for your ads, or to simply ban you from AdWords or AdSense entirely. 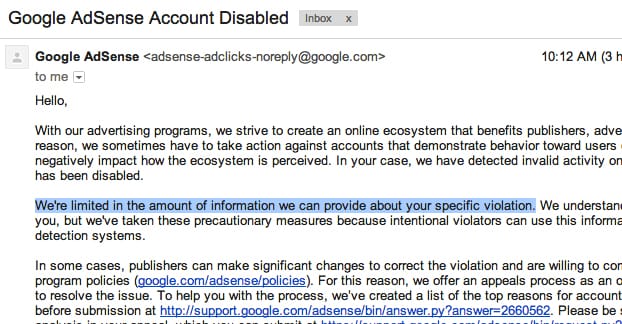 The other problem is that you’re almost definitely going to be paying more for the traffic than you earn from that traffic. Paying for incoming traffic is typically more expensive, since even if you’re getting the same money back, Google is taking their cut. You simply end up wasting cash in a cycle of stupidity.

This is all not to say that running ads is an immediate demotion. A few reasonably placed ads are fine, and even encouraged by Google. They realize you want to make money, and they’re going to let you do it, so long as you’re not harming the user experience to do so.

This goes for all kinds of ads. AdSense and AdWords are one such ad type, but other ad networks are included as well. You can run banners, text ads, and what have you from Clicksor, Infolinks, or any other ad network you choose, so long as that ad network isn’t trying to cloak or hide their ads, and they don’t have a history of serving malware to users. Those are the only things that will get an ad network alone damaged.

Beyond that, it’s all about usage. If you’re putting too many ads on the page, it doesn’t matter what type of ads they are, they’ll be demoted. The same will go for ads you run with a private ad network, or affiliate links, or anything else.

Since there are two kinds of Google ads, there are two different possible benefits to be had. Even if AdWords doesn’t boost organic search ranking directly, it can still be beneficial.

First, AdSense. As mentioned above, AdSense is the program you use as a publisher when you want to make money. The benefit here, of course, is making money. The more money your site is making, the more you can afford to spend. When you reinvest your profits, you can boost your site in ways that help you gain search ranking, which in turn helps you earn more money. 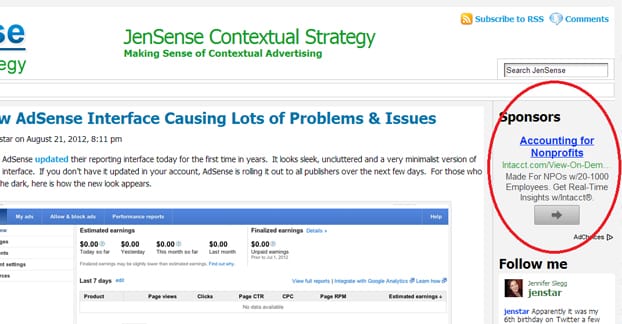 You can also pay for more and better content. Maybe you started off writing it yourself or paying cheap freelancers, but it hasn’t served you very well. When you have more money, you can afford to pay more for better content, eventually hiring dedicated premium-tier writers. Better content attracts more readers, who will be happy to see how much value you provide, and will be more likely to click your ads or buy your products. Better content facilitates better ads and more profits, which in turn facilitate more good content.

You can pay for more and better ads directed at your site as well, though as I mentioned above, spending money on traffic that leads to AdSense-enabled landing pages can hurt you. Instead, direct your AdWords ads to landing pages for products or services, and let users browse to your blog organically from there. If the blog has AdSense on it, that’s fine; just so long as it’s not the landing page.

Now, what about AdWords? You don’t have the same benefit of getting money directly, because you have to spend money on the ads. However, what you get for that money is traffic, ideally targeted traffic.

Targeted traffic is great, because it’s the kind of audience you want to have around. People seeing your ads will discover you when they might not otherwise have ever encountered your site. When they see that your site is about their interest, and they see you have value, they’ll stick around to read. This exposes them to your marketing and to your content.

As long as you have a satisfactory user experience, and as long as you have a way to make money from those interested users, you’re going to come out ahead. Ideally, you’ll do more than run AdSense on your pages, but it’s better than nothing if it’s all you have. If you sell products, you can get people buying them. You can get people signing up for subscriptions. You can get them clicking your affiliate links. All of this makes you money.

Additionally, these people may remember your site or your name. They can become dedicated followers, coming back to your blog organically in the future. They can follow your social media accounts and become brand advocates, if you’re particularly lucky. All of this is beneficial to your organic ranking, indirectly.

At the end of the day, it’s a balancing act between what possible detriments you get out of your advertising, and what benefits you get from it. If you’re running your ads poorly, it can hurt more than it helps. If you’re running them well, you benefit enough to outweigh the possible drawbacks. That’s why iteration and testing are so important to modern SEO.