Case Studies on a Responsive Redesign and Impact on Rankings 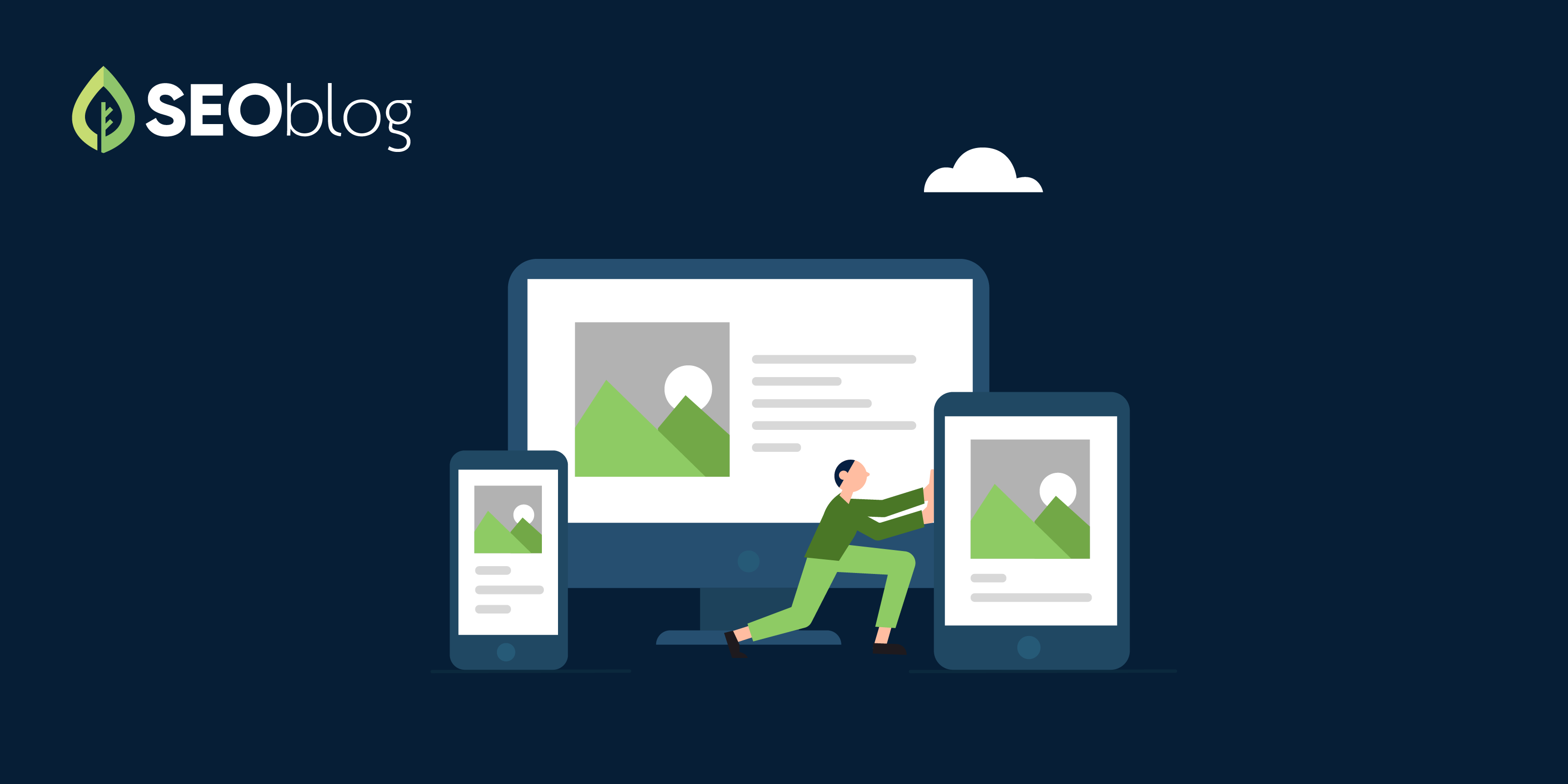 It has been known for some time that Google uses whether or not a site is mobile-friendly as a search ranking factor. What makes a site mobile-friendly? Generally, it means a site is usable on a mobile device without the need to scroll horizontally or zoom in. It also includes a few other factors, like whether or not the site loads quickly – the site speed factor – and how close links are together, i.e. how difficult it is to “fat-finger” the wrong link. They initially rolled out this update on April 21 of 2015, and they made the algorithm stronger in May of 2016. They have also, for a long time, had a mobile friendliness tool available to help you check whether or not your site passes their requirements.

There are three ways to go about making a site mobile friendly. The first is to use a redirected sub-site designed for mobile, generally either a subdomain – the m.site.com method – or a subfolder – the site.com/mobile method. This is inelegant and requires detecting the mobile device type, redirecting to the appropriate page, and properly setting up that page for various sizes and processing capabilities of mobile devices.

The second alternative is adaptive design. Adaptive design first identifies the device loading the page, then generates and serves a version of the page designed for that kind of device. This requires a lot of careful set up and includes an additional server back-and-forth call to identify the device, so it’s slower than most options.

The third alternative is to create a responsive design. A responsive design dynamically loads and unloads content based on the size of the display used to render the page. You can often test a responsive design on a desktop simply by resizing your browser window. For example, if you go to Moz and scale down the browser, you will eventually see the site switch to a mobile display, with the top menu represented by the three horizontal bar button, and most site elements stacked vertically rather than side by side. 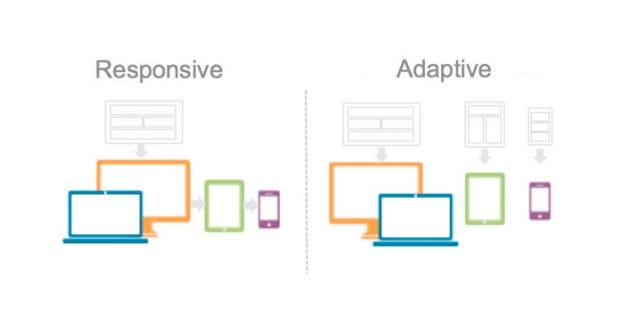 Implementing a responsive design is a lot of work. It’s difficult to accomplish if you’re not an experienced web designer, and if you want to hire an experienced web designer, you need to pay a good chunk of change. Plus, this can involve changes to the back end of your site, including your plugins and analytics, which may or may not be easy to adapt to. In other words, it’s a lot of work with a lot of potential for failure along the way. Many sites have opted to take the Google penalty for not being mobile friendly, and try to make it up in other ways.

The question is, is it worth the SEO benefit to make the change? Or can you live on without the benefit, take the penalty, and improve in other ways? I believe that it’s worth implementing, particularly if your site is relatively lightweight, but in order to prove this I’ve looked up as many case studies on it as I can find. I’ve presented them here, with links and summaries.

Before we begin, the first thing I’m going to do is tell you what Google wants out of a site. They list the three ways to serve a mobile page – separate pages, adaptive, and responsive – and list their own pros and cons. However, they say one thing up front: Responsive design is Google’s recommended design pattern. 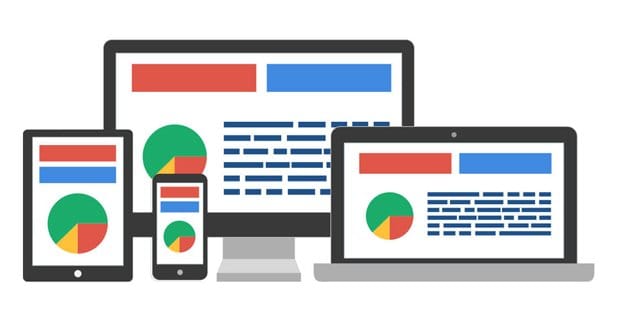 What they don’t say is whether or not using responsive design will give you a larger boost than using adaptive or separate designs. It’s up to you to make the decision, but it’s likely that responsive is at least slightly favored, simply because it’s versatile and fast.

Every two years, Moz performs a broad-spectrum survey of as many search marketers and firms they can find. In 2015, they surveyed over 150 marketers with opinions on over 90 different ranking factors. On top of that, they included a broad correlations study between which factors are used in which way on which top sites. It’s correlation, not causation, but it gives weight to their results.

With this survey, the second-most important factor throughout the survey for domain-level non-keyword features was responsive or mobile design. This came in second under unique content across the site. Obviously, marketers rated this factor very highly. 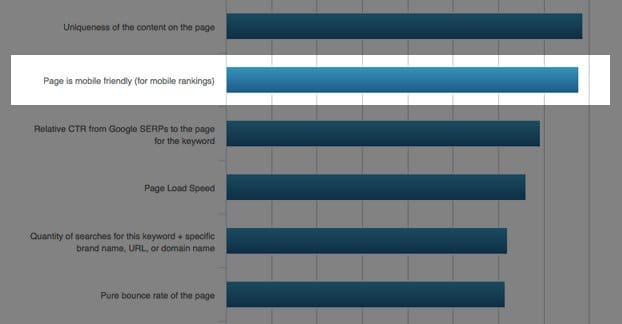 However, this is not a case study. Neither is it actually presenting evidence that responsive design is a ranking factor, or that it’s an important factor. It’s simply a survey of what various marketers felt, and how prevalent mobile design was on sites that rank highly. Again, it’s a correlation study, not a causation study. It’s just further proof of the general opinion that mobile optimization is important, as of 2015.

It’s also important to note the age of the study. Moz performs this study once every two years, so we’re due for another one in a few months. Stay tuned on Moz for the updated version, which I suspect will indicate that mobile is even more important than it used to be. After all, an increasing number of users are using mobile devices to access the web, either partially or totally, and Google did increase the importance of mobile design in 2016.

This case study was presented on Moz, by a YouMoz contributor. The brand being represented is Offspring. No, we’re not talking about the band; this Offspring is a UK-based shoe store.

Prior to the case study, Offspring had no mobile site whatsoever. Mobile users would have a difficult time manipulating the site to find products they were interested in, which meant the site took a hit to conversions and revenue as mobile browsing increased. 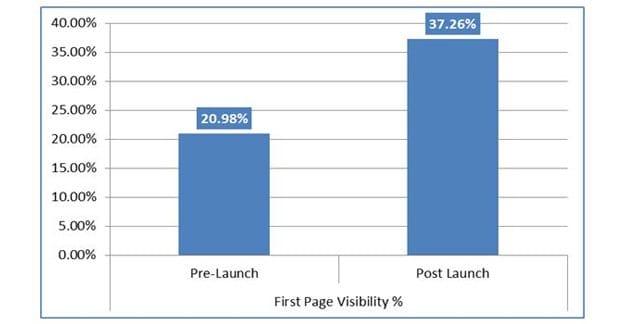 Verdict: Having a mobile site is incredibly important and valuable for a commercial website based in the UK. However, there is no study here to determine whether or not a different sort of mobile-compatible site would have caused similar results.

This study shows data for an anonymous big brand client of the V9 marketing company. 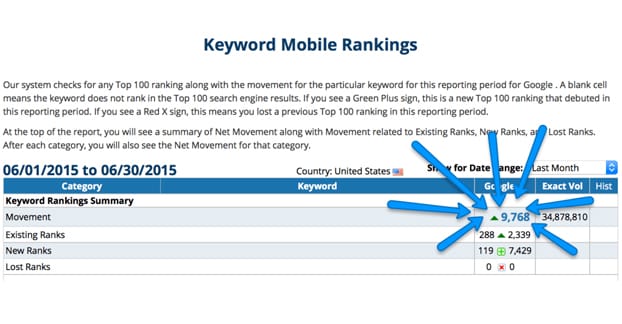 There isn’t much data shown, but from what is displayed in the screenshots, we can see:

Verdict: It’s undeniable that having a mobile design is imperative, even two years ago. However, again, this study does not provide much in the way of deep, verifiable detail. It also does not indicate whether any kind of mobile site has the same effect, or just a responsive design. Additionally, Google is known to love big brands with a ton of existing SEO weight, so these results may be higher than the average.

First of all, this study is fairly old compared to others on this list. It actually predates Google’s addition of mobile friendliness to the algorithm in a public way. It’s focus is more towards identifying whether or not mobile compatibility is a search ranking factor at all. It’s somewhat in response to the Hummingbird algorithm update. 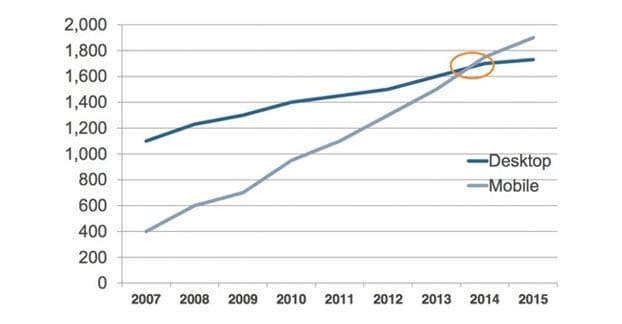 Actually, there isn’t much data to this case study, just extrapolation. It simply goes to show you that even before Google officially announced that mobile compatibility was important, other brands were already identifying the fact. It shows that if you don’t have a mobile site by now, you’re behind the curve.

This is a very light case study from Uptrending, about the brand ShipHawk. ShipHawk rebranded from an enterprise-level logistics solution to a more broad-spectrum shipping option. Their new service converted to a SaaS solution, with persona-driven experiences for the user. Their new freemium model works for people at all levels of business. 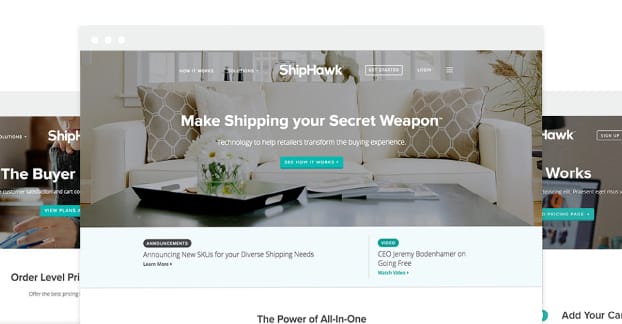 Verdict: unknown. This case study proves that something makes their site better, but it could be the new product shift just as much as it could be the mobile shift. There’s no data to indicate whether or not mobile had an effect. It’s a typical case of “changing two variables in a split test.”

In the time frame from August 2014 to August 2015, desktop revenue increased by 13.53%, indicating that the shift to Bootstrap, or perhaps just a year of natural growth, shows at least some progress. In that same time frame, tablet-specific revenue increased by 26.53%. This is double the progress of desktop growth, indicating mobile users converting at a higher rate. Other mobile device revenue, which likely includes non-specified tablets as well as smartphones, increased by an amazing 280.24%. While it is still lower in raw revenue than just tablet revenue, it’s an insane increase spurred by a mobile design. 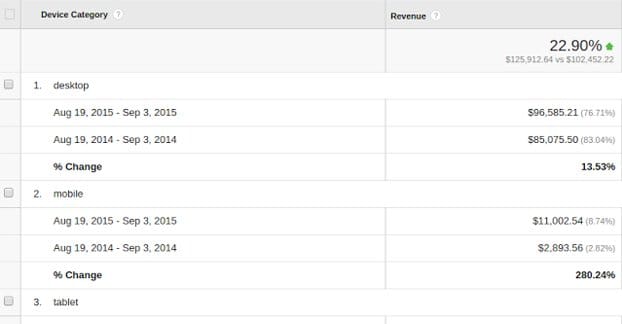 Verdict: Again, mobile design and mobile sales processes are essential for anyone doing business on the web these days. However, it’s again impossible to tell of responsive is better than other forms of mobile compatibility, as there was nothing to compare against.

This case study takes a massive web client and follows their process. The client is WalMart.CA, the Canadian version of WalMart. In this case, WalMart already had a mobile site. They did a study and realized that a large portion of their traffic came from moms using tablets as their primary device. They recognized that their website looked and functioned terribly on tablets, so they opted to do two things: convert to a responsive design and implement mobile optimizations. 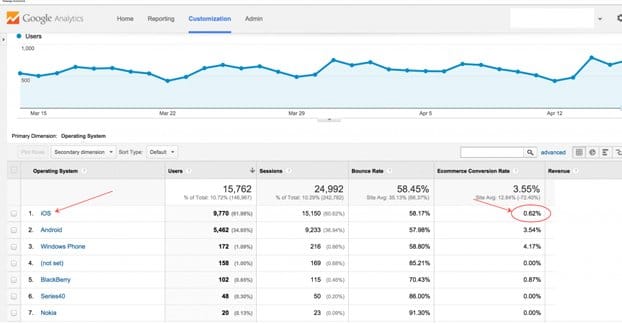 What WalMart found was that after these two changes, conversion rates went up by 20% and sales increased on mobile by 98%. This is, as we’ve come to expect, an incredible increase, particularly for a big brand you would expect to have optimized a lot already.

Verdict: Again, we don’t see much data specifically about whether or not the conversion to responsive design produced these results. The case study in question indeed emphasizes that it was the mobile optimizations, not mobile compatibility, that had the greatest effect.

Being mobile compatible is essential, but it can be done poorly. Ideally, you will make extra changes to your site to optimize and cater to mobile users. Big buttons, understanding the content they want to see first, optimizing site speed, and accurate reporting are all essential.

In the end, we don’t have a good study to indicate whether responsive is better than any other mobile compatibility, but one thing is clear: you absolutely must be mobile-friendly in this, the year 2017, or else you’re losing easily half of your potential revenue.