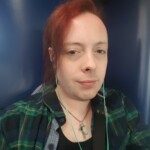 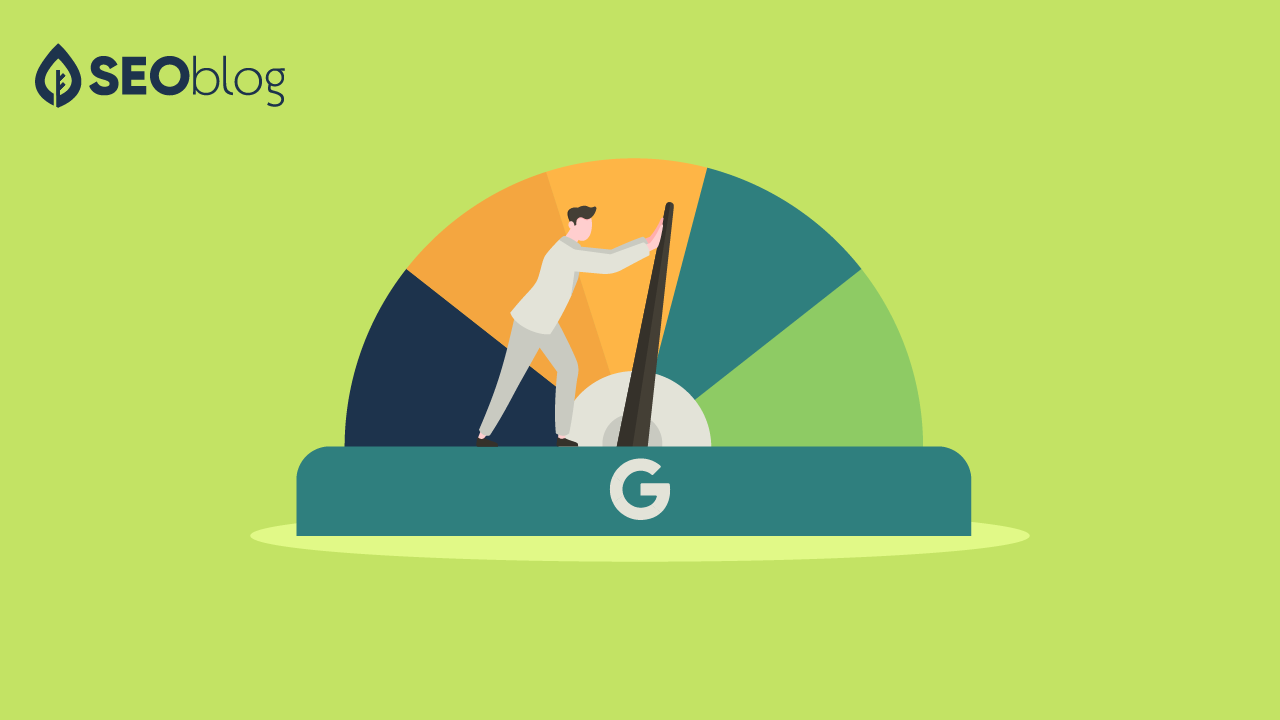 Users of Google’s PageSpeed Insights didn’t always understand the context of the data they were presented with. If you’re new to search engine optimization (SEO), you could be one of these users. Fortunately for us, Google has taken the time to address people’s confusion and rolled out changes to the tool to make data easier to parse and understand.

In May 2021, Google introduced the Core Web Vitals as a read-out for its tool. These have become a ranking factor since. 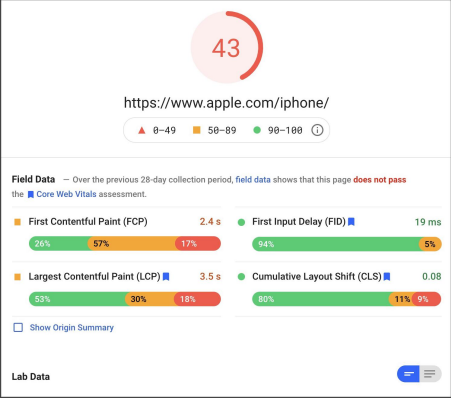 Core Web Vitals data was relatively top-line, and the main focus was still on the PageSpeed rating score. As per the new layout, there seems to  have been a fundamental shift in focus: 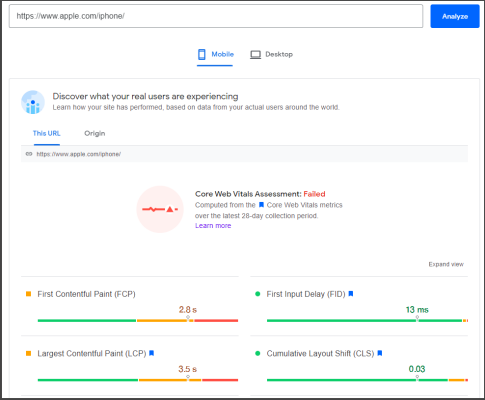 With the new layout, there’s a much stronger focus on the Core Web Vitals metrics, which have been pushed higher and given an overall synopsis; in this case: “Core Web Vitals Assessment: Failed.”

Not only are the Core Web Vitals more prominent, but they can also be  expanded: 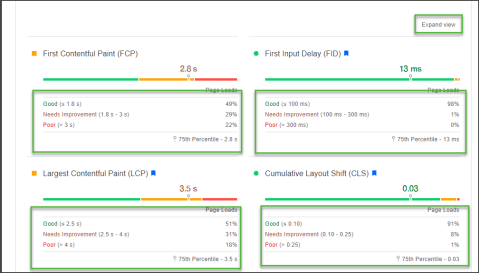 The expansion boxes give granular detail as per Google’s attempted page loads. When checking a page in Google’s PageSpeed Insights, the check takes significantly longer to perform than when you load the checked page in a browser tab. That’s because Google attempts to load the same page numerous times when generating PageSpeed results.

For the page in our example, we can see that the Core Web Vital called Largest Contentful Paint (LCP) is slow, with 51 percent of page loads in the good range, 31 percent in the “needs improvement” range and 18 percent in the poor range. This tells us LCP is only successfully met for this page around half the time (and thus the page fails the test).

At the top of the interface, lab data seems to have been removed. If a page has insufficient “real-world” data, no lab data is offered as a substitute at the top of the read-out, unlike the old version of the tool:

However, if you scroll down the tool’s read-out, estimated lab data (and the associated PageSpeed rating) are still available: 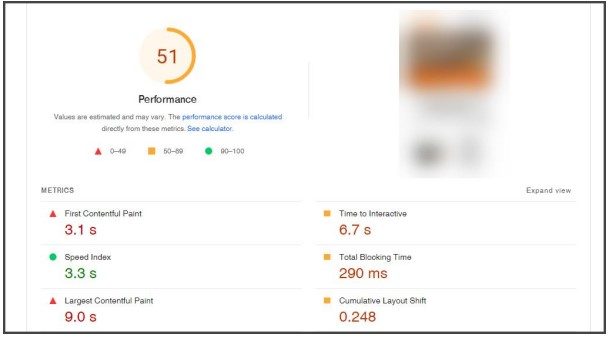 Near the top of the page, there’s a new “Origin” toggle: 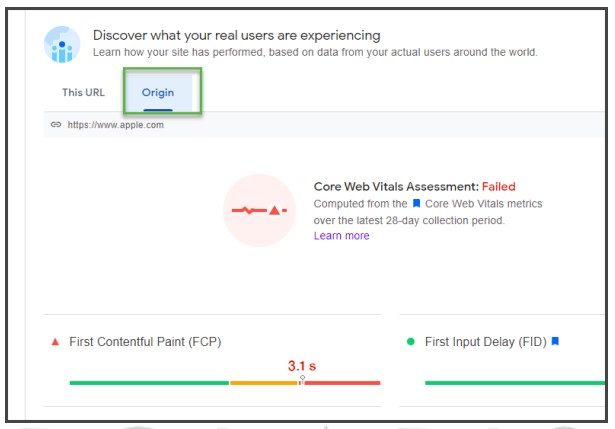 This allows you to move away from data bound to the checked URL, and instead to view “origin” data. Origin-level data is an average of all data collected for all pages on the specified website – not only the specific web page being checked but also the whole website!

Toggling between “This URL” and “Origin” can quickly help a webmaster ascertain whether an individual URL is performing above, in line with or below other pages on the site (from a Core Web Vitals perspective).

Sometimes, if there is insufficient URL data, Google’s PageSpeed Insights will default to origin-level data instead. As previously mentioned, if there is insufficient real-world URL-level and origin-level data, Google will show the “No data found” error. In such a situation, simply scroll down to where the tool says “Values are estimated and may vary.” Below that point, you have a small “METRICS” heading, which is Google’s emulated lab data.

You can still use Google’s estimated data if real-world field data is unavailable. This is probable for sites with low traffic, which are likely to see the “No data found” error nearer the top of the tool’s output. Google’s real-world field data mostly comes from the CrUX report. Google states that this data comes from Chrome users who “have opted-in to syncing their browsing history, have not set up a Sync passphrase and have usage statistic reporting enabled.” This is clearly not everyone, so traffic has to reach a certain peak before field data is available.

The design of the page has been altered, and the tool looks much slicker. But in terms of things that SEO specialists need to care about, here are changes that we’ve observed so far:

There have been lots of interesting changes from Google’s side. The re-arranging of the user experience (UX) to put Core Web Vitals first makes perfect sense after  Google’s recent algorithm updates. It’s pretty great to be able to expand individual Core Web Vitals metrics to see data by page load. The newly accessible origin-level data for field data, specifically, is a nice touch. Previously, there was an “origin summary,” but it wasn’t so useful.

So there you have it! As Google overhauls its tools and the various associated interfaces, we continue to be vigilant and interpret these changes.

Jimmy Allen is Technical SEO Manager at POLARIS, an SEO agency based in London. He has worked in SEO for over 10 years, working for several agencies and across multiple clients. He specialises in deriving business-level and commercial insight from data.

Artificial intelligence (AI) is proving to be a valuable asset in many...

Content curation is defined as gathering and sharing existing informat...

A picture paints a thousand words. It goes without saying that images ...