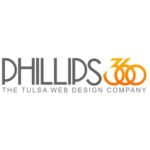 Phillips360 is a Tulsa based multimedia company that provides services that span the whole spectrum of media and web. We can provide the following services for the most competitive rates in Tulsa and have over 25 years combined experience.

Mike is wonderful! He is so patient and never gives up until he find the solution. I am using him on my next project as well!

We worked with Mike and he did a great job of putting together just what we asked for.

Contacted Mike about an issue with my wife’s web site (created by someone else) and Hosting company. Mike was great to work with and explained everything. Took care of the issue quickly. We will be using Mike going forward with future updates to the web site. Thanks Mike!

I’ve called several web designers in Tulsa and was just not satisfied with the response I received until I found Phillips 360. I called around 8:00 pm on a weekend not thinking that anyone would answer. To my surprise I reached Ryan. I talked with him about what I needed now and what I wanted in the future. He was very responsive and took the time to answer and delivered what he said he would. I highly recommend Phillips 360, they are a great company!

Mike wrote a review of a website that costed us a lot of money that had yet to yield any money. He agreed that the website was worthy and out of date. Thanks to Mike we got ALL our money back! He knows his stuff! When you need a Website or help with an existing one call Phillips 360!

Mike wrote a review on a website we purchased and we were not getting any money off of the website. Mike confirmed the website was out of date and worthless. We were able to get our money back thanks to Mike! If you need a website built or need help with an existing site call Phillips 360!

Great service and timely response from Michael… He initially made my site look more current and in less than a couple of weeks this internet novice screwed it all up with one click. Michael was able to repair it back the morning after with ease and was grateful not to charge me for it. Will continue working with this team.

Mike has been great to work with–responsive to our needs, flexible and delivers on time. We’ve used this company more than once and are very happy with the results. Highly recommended!

Great company! Mike worked hard on our website and the results are phenomenal.