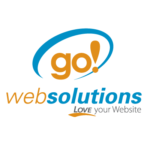 Our motto is simple…Love your Website, Love your Results. Our focus is creating and managing great looking websites that turn your visitors into customers. From award- winning web design to targeted monthly website management that includes maintenance, internet marketing, website monitoring and detailed reporting, partner with you to drive more traffic to your website and convert it into new business.

Go Web Solutions was my first experience with E-Commerce. What I thought was a simple task and Shopping Cart was a much more complicated than I realized and I had a very tight deadline to meet. Joey and his team walked me though the process and explained everything they needed to do to get me set up. With such a tight deadline, the communication was great…evening calls and emails to make sure we were up and running on time. Joey still checks in with me to make sure everything is running smoothly.

We moved our web hosting from Go Web Solutions Inc. to another company which promised the moon and the stars. Not only were we were sorely disappointed with our decision, but we had wounded our business relationship with Go Web Solutions Inc. Our company ultimately decided to establish a new website with yet another internet advertising company. When our new web developer ran into technical problems putting our new website online, we contacted Joey Ambrose who provided them with essential information and technical support. Mr. Ambrose responded generously and professionally and Oasis Air Conditioning & Heating, Inc. is deeply grateful. We couldn’t have done it without you!

Go Web Solutions was hired by the first owner of my business, the web page won an award, so I stayed with Go Web when I took over the business almost 4 years now, why change anything. Joey has really helped when I needed an extra boost. He is full of every changing ideas, so I know he is on top of current solutions for businesses and their ever changing needs for the internet traffic. Thank you.

I hired Go Web Solutions to help with search engine optimization (SEO) as my website was already created. I was initially disappointed when I ended up paying double my first month with them. They told me that they couldn’t work on SEO until they did the setup,but then spent the entire first month doing setup while charging me for both setup and SEO.That first month was the LAST time that my website was touched by them. I sent multiple email requests for an explanation as to why nothing was happening but no progress was made. I never received any answers to those questions.Finally in month 3, Joey Ambrose, Owner, asked to meet with me. He had every excuse in the book as to why nothing had been done. He told me that he got rid of someone who wasn’t doing her job and offered to double up on time spent on my website to make up for it. I agreed, hoping that things would turn around as I really did need SEO services.One month later, absolutely NOTHING had been done on my website. In addition, six out of my seven emails sent to Joey that month were completely ignored. The other one received a one-line response. At that point, I requested a cancellation of my six-month contract and requested a refund of two months’ payments. I was trying to be fair by not asking for a refund of all the money I paid them since Randi had been doing social networking as contracted. Still, out of the 7 things Go Web agreed to do on our contract, only two were being done, one of those being an automated report that was sent by email.Joey agreed to the refund, but asked that I allow him to work for free for up to two months to retain me as a customer. For two weeks, I checked my mailbox and never received the refund check. During this time Joey was not returning emails or phone calls. And of course he did NOT work on my website (as evidenced by the modification date that is recorded on each page of my website).Finally, my husband had to set up an appointment to meet with Go Web just to give me an opportunity to talk to them. We had to inform them that we were planning legal action if we didn’t receive the refund. Joey did come in and give me my refund, all the while talking about getting together again to talk about marketing. I don’t want to talk about marketing; I’d like to pay someone to actually DO the marketing they contract to do.Joey talks a good game, but there is NO ACTION behind it. This company is a complete fraud!

Tucson Great Decisions Association had been thinking about a website for several years. GoWebSolutions made it happen in less than a month. In so doing, they allowed us to make the site available to the group facilitators early in the planing period for the 2013 season. The GoWebSolutions team gave us plenty of timely help as we learned how to use the site and manage it going forward.Great job GoWebSolutions.

Great team, great work and always ready for the challenge! Shout out to Randi who is our blogger and social media guru….She is amazing! -Joanna

Go Web Solutions took a pencil drawing and a scattered idea and turned it into one of the top Girl Scout websites in the country. The design is flawless, the functionality is top notch and it was the most painless process I’ve ever had to go through. Joey and his team are quick, professional and easy to work with. They taught me along the way and let me voice my ideas throughout the process. Now that its done, I have the tools and knowledge to run my site with literally zero worries. Thanks Go Web Solutions!

Joey and his team are fantastic and easy to work with! I highly recommend them!